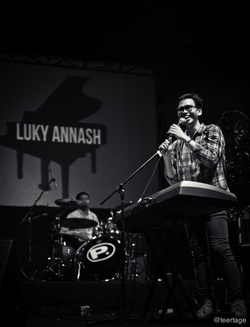 Annash revived the use of piano in Indonesia’s independent music industry by combining the stark, lyrical attack and alternative rock sound of the 1990s. His music combines the orchestrated emotions of Tori Amos with the enigmatic poetry of Tom Waits and the powerfully charged sound of Slayer.

Annash is the youngest child in the Annash clan. His two brothers, Eka and Rully Annash, are two members of Indonesia’s pioneering garage rock band BRNDLS (formerly known as The Brandals). Annash has played as additional keyboardist for BRNDLS and several other independent music groups including Tika & The Dissidents and Godsmustbecrazy.

Annash’s debut album 180º, released in April 2011 by Demajors Record, garnered critical acclaim across Indonesia. It was listed as one of the top albums in 2011 by Rolling Stone Indonesia and the country’s longest running political magazine Tempo.